He is one of the most celebrated children’s writers of the last 25 years and one of his best-known poems is an ode to his favourite food: chocolate cake!

Now Michael Rosen’s words about the treat he loves the most have inspired students at Oriel Academy West London to demonstrate their creative skills by writing their own versions.

Rosen has recently served as Children’s Laureate between 2007 and 2009 and became a household name after writing the iconic 1974 children’s book ‘We’re Going on a Bear Hunt’.

The pupils read and discussed Rosen’s poem ‘Chocolate Cake’, which recalls a time in his childhood where he snuck downstairs in the middle of the night to “take a little look at it”.

The Oriel Academy pupils were then tasked with writing their own  poems but to adapt them so that the theme is about their own favourite foods instead.

Chocolate chip cookies, McDonald’s and even edible flowers were just some of the gastronomic delights chosen!

Helen Owden, who led the group, chose Michael Rosen, and in particular, Chocolate Cake because it is a particularly amusing poem, and the video version of Rosen reciting the poem as he does so is engaging.

Ms Owden said: “The children who are in school are different ages, so the tasks that we complete have to be suitable to cater for different ages and abilities.

“More importantly, though, it is a really fun way to access poetry, and there is no right or wrong answers! The children are able to explore their opinions without limitations, and can totally immerse themselves in creativity.”

The Year 5 and 6 pupils that completed the activity were so engrossed with writing their poems that they even went out to playtime late, as they were enjoying writing poems about their favourite foods so much.

You can read the children’s Michael Rosen-inspired poems below: 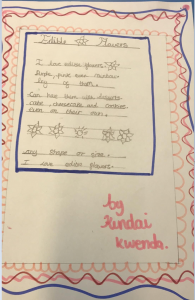 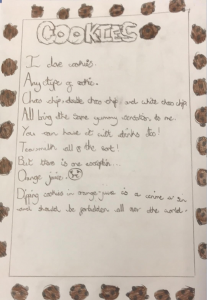 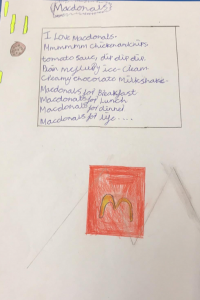 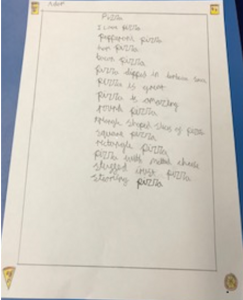