He may be fearless on a football pitch but once his boots are off, Chelsea superstar Christian Pulisic has revealed there is one opponent that would leave him trembling.

The £145,000 a week US international forward has revealed he is terrified of spiders!

Pulisic’s secret came to light following forensic questioning from 11-year-old Chelsea fan Alfie Ellis Morrison. The Year 6 pupil at Oriel Academy West London, won a Junior Blues competition and was given the role of ‘mini reporter’ at Chelsea after applying online via a video application process.

The bright youngster had originally applied to be a humble kit man but his natural charisma in front of a camera shone through.

Alfie told the South West Londoner: “The video took ten takes to record because I wanted to do it perfectly.

“I had applied to be a kit man and the video was about why I thought I would make a good kit man.

“But they thought that I was really good in front of the camera and said that I would be a good reporter!”

Alfie’s fearless nature and his ability to keep cool and calm when faced with the rich and famous came to light during the interview which took place at Chelsea Football Club’s training ground in Cobham.

Alfie said: ‘’Pulisic was a little late to our meeting because he was having physio for a recent injury.

“I wasn’t nervous at all when I was about to speak to Pulisic. I was told he was just a normal person and that’s exactly what he was. It was just like speaking to anyone!

“I asked him if he was scared of anything and he told me that he was terrified of spiders! I was quite a bit shocked at that because I didn’t think that a professional footballer would be afraid of spiders.’’.

As part of his duties as mini-reporter, Alfie attended the official Chelsea press conference ahead of match day, whereby Alfie was able to ask Chelsea legend and current manager Frank Lampard a question.

“I asked him what his favourite question is to be asked at press conferences, and he told me that he prefers being asked tactical questions as journalists sometimes try to make him say things that he doesn’t want to say”

“I really enjoyed it because Lampard put his thumbs up to me when he answered my question” Alfie added. 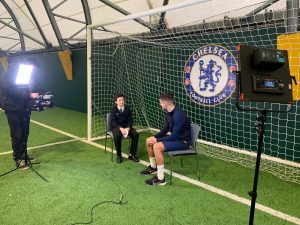 In addition to spending the day at Cobham Training Centre with his heroes, Alfie was then invited to attend a Premier League fixture against Burnley at Stamford Bridge, where he and his Dad watched the Blues win 3-0.

“Before the game, we got to high-five the players as they arrived at the stadium and N’golo Kante said hello to me and told me that he recognised me from the training ground!”

“My highlight from the experience was at half-time, when we were given the opportunity to put our boots on and take penalties against Chelsea mascot Stamford the Lion. I smashed my penalty in to the top-right corner of the goal and the crowd cheered me as I scored!”

Aine Linney, Principal at Oriel Academy, which is part of the Aspirations Academies Trust, said: ‘’This was a great opportunity for Alfie and he hasn’t stopped talking about what a great day he had!’’